It may be possible to route energy into other dimensions or into other aspects of strings.

Kinkajou : This is a really new concept. Something I don’t think we really do much if at all. Most of our shields are made of physical matter. Armour so to speak.

Erasmus :There is however such a thing as energy shielding. For example, fusion reactors use electromagnetic flux to create a bottle in which the fusion reaction can occur. Unfortunately, these types of shields have “sign”, which somewhat limits their ability to shield. A shield that is positive will push protons into the centre of the flux bottle, but will attract electrons. So you can’t have it both ways. You can either push or pull against positive or negative charges, but you cannot do both at the same time.

Energy shields are otherwise one technology that I always thought was pure bullshit. I have lost count of the number of Sci Fi books where the spaceship is protected by shields. “Shields of what”, I always thought. I could not see my way through to where such a thing was even vaguely conceivable.

There is no way to deflect rocks , nonmagnetic projectiles, non-charged particles or streams of photons with the only forces that humans had at their disposal i.e. electromagnetic forces, gravity, (strong and weak nuclear bonding forces).

Erasmus :Then I read a book called “Halo”, based on the Xbox game of that name. Suddenly perhaps such a thing may be possible. The basis for shields relies on the fact that the universe actually has 11-13 dimensions. It may be possible to deflect incoming energy or matter into these dimensions or to alter some facet of the vibrating nature of their strings” so as to change the ability or projectile or particles or forces to do damage.

I became quite excited when I read the “Halo” book. Perhaps human beings could exploit some facet of this technology not to shield a spaceship, but at least to shield a nuclear reactor core or to control, contain deflect or direct particles: atomic or subatomic.

It still brings us no closer to seeing if there could be a reality in this proposal. Still, now there is at least some sort of vague theory that suggests that it may in fact be at least “possible”.

Kinkajou : Any other perspectives on shielding from say the Quantum world?

Erasmus :Quantum theory suggests another possible solution. All matter effectively exists in all places in the universe at all times. (In effect, the dimension of space does not exist in the quantum world). It may be possible to displace matter to somewhere else using a quantum displacement model, effectively creating a shield.

This would make an immense difference to our ability to achieve many tasks. Fusion reactor cores, antimatter reactors or antimatter drive chambers and military shielding are all possible applications.

Kinkajou : We don’t even know if these things have a sound theoretical basis or are even possible.

Erasmus :True. At this point in time, humans are not even close to anything even looking vaguely like a shield. Still, if we go back a century we were just starting to wrestle with radio waves and radar. Now we routinely generate these same waves, for communication, in electrical current generation, in cooking (microwaves) and in shielding for fusion reactors and particle colliders.

Erasmus :Time and the future will tell where we go in the next 100 years.

What Has Real Life Suggested as Energy Shields?

Kinkajou : So how have people imagined force fields or energy shields?

Erasmus : These shields or fields are often known by a number of names. Common names include: plasma shield, force field, energy shield, deflector shield. The concept suggests a force present in space of sufficient magnitude to affect physical objects or matter or energy passing through space.

A force field, sometimes known as an energy shield, force shield, or deflector shield is a concept of a field tightly bounded and of significant magnitude so that objects affected by the particular force relating to the field are unable to pass through the central axis of the field and reach the other side

Kinkajou : Do we actually use anything of the sort?

Erasmus :Yes, we actually do but only in very specific applications. Humanity is capable of generating very strong magnetic fields.

I think that when we talk about force fields and shields we’re talking about military applications of fields and this is a very different area to our current commercial and industrial uses of fields.

Kinkajou : What about electromagnetism? Any new ideas?

The best way to shield against magnetism is with magnetism. (Magnetic force is based on very very very long wavelength photons, hence the predominance of field properties, versus particle like properties for higher energy photons.
Because we currently have few weapons which use this type of technology, we really have not learned to defend against incident electromagnetic (i.e. emphasise magnetic) energy.

Kinkajou : Back to the magnetic shielding example, “where might this be used in spaceships?”

Erasmus :Scientists in Britain and the USA have invented a “mini-magnetosphere” to protect astronauts during solar storms. NASA has developed a mini magnetosphere shield for a Mars mission.  It turns out that prototypes guarantee almost total protection against high energy solar particles / ions (especially alpha particles), such as commonly appear in solar magnetic storms.

One developed system that uses energy equivalent to the output of an electric kettle to create two mini magnetospheres within two mini satellites outside of the spaceship. In the event of an increase of solar wind flux or approaching cloud of energetic particles from a flare or a coronal mass projection (CME), the magnetosphere device can be switched on, resulting in a deflection of solar irons, namely protons and electrons away from the spacecraft.

“Solar storms or winds are one of the greatest dangers of deep space travel. If you got hit by one not only would it take out the electronics of a ship but the astronauts would soon take on the appearance of an overcooked pizza. 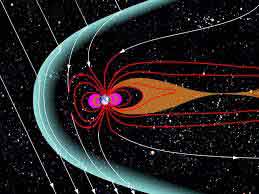 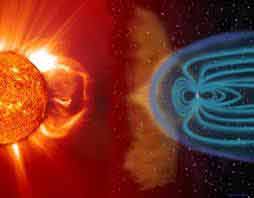 Erasmus :Shielding from RF (radio frequency) electromagnetic photons is a much simpler process. A simple sheet of aluminium will reflect much of this energy even at very high incident energy levels. Since many of our military craft are constructed from metals, there is a significant amount of inherent in a shielding already.
(CENSORED)CENSORED "ref ...................." by order of “Frobisher” authorised by “The Commandant”.

No military devices of the “shield” kind currently exist in a practical form, although some are exploring possibilities. 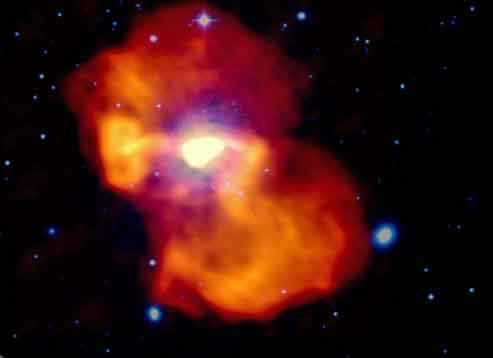 Kinkajou : So any other ideas for the real world?

Erasmus :Well yes there are some very obvious other prospects we have not mentioned. The most obvious arises from the generation of gravity. This is a very important in fact critical field for humanity to learn to generate. If we can generate gravity we can:

Gravity is a distinct advantage over EMF shielding as it acts on inert as well as charged matter equally. In short, it acts on all matter.
So the critical technology to enable us to use energy field energy shields is development of the generation of gravity. (CENSORED) CENSORED "ref ...................." by order of “Frobisher” authorised by “The Commandant”. 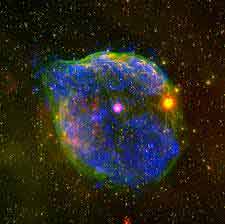 Kinkajou : Any thoughts for the future?

Erasmus : In the future:  perhaps we can use strong and weak nuclear forces to provide a conduit for energies to different dimensions. This is something I think no one has imagined much. Also the quantum world beckons us with possibilities. So where we end up, nobody knows.

What Has Fiction Suggested as Energy Shields?

Kinkajou : Tell us what people have imagined energy shields being like.

Erasmus :Uses of Shields in Fiction and Video through the ages

Dune -Shielding - the Atreides and other people used shielding- advantages but also dangers in its interaction with lasgun energies.

Kinkajou : Tell about the energy shielding proposed in the Halo Series. I think most kids today would be aware of the Halo technology.

Erasmus :Energy shielding is an important piece of technology that protects users from harm. The use of shields is well expounded in the Halo series of video games. Shields may be integrated into different armour systems such as the MJOLNIR or the Sangheili armour or may be used as personal shields by soldiers such as the Covenant Jackals. Shields of this sort are also useful in electronic camouflage systems and infrared diffusion camouflage.

The greatest example of the Covenant's understanding is in the use of body shielding, for all Elites, with the exception of Stealth Elites in Halo. Nearly all Covenant vessels are protected by a highly resistant energy shield that can recharge over time.

The only known flaw of Starship shields is that when the vessel fires its Plasma weapons, the ship needs to drop a section of its shields for a fraction of a second. Otherwise, the Plasma Torpedo would detonate on the inside of the shields.

Kinkajou : So what do you think Goo?

Goo :
I think it’s very obvious the most critical field we need to be able to generate is gravity. Gravity is a field. Gravity is a shield.
There is room for considerable development in magnetic and RF shielding. (CENSORED) CENSORED "ref ...................." by order of “Frobisher” authorised by “The Commandant”.