Erasmus :“Fusion Power” emerges as the front running technology for production of energy. It is the generation of the containment field and the ability to generate an energy output in excess of the energy input, which is the problem with this technology. However technology may well have a solution. If humanity can learn to generate and manipulate gravity, the ability to generate electromagnetic as well as gravity fields may well change the nature and financial aspects of containment fields for fusion technology. Dual field fusion bottles may revolutionise many aspects of energy directive technologies.

Goo : But do we really need fusion power? Surely just a lot of solar panels would meet all our energy needs?

Kinkajou : Or even solar panels in space, dealing with all that dense solar energy closer to the Sun and outside the atmospheric envelope. Sunshine twenty-four hours a day.

The Commandant : It’s about energy density and immediacy.
High power – when and when you want it.

Erasmus : “Dark Cities” focuses on how cities need to be integrated to reduce their footprint on the planet, and to maximise their potential for sustaining life and civilisation. If we are to avoid the scenario of the “Catastrophic Collapse Theory”, we must make every effort to build our cities as self-sustaining entities.

Goo : If the city is dark how can the workers see to work?

Erasmus : The "dark city" concept is about closed loops of resources: be they energy, food, organic materials or minerals.

Erasmus : The “Nano Tech” pages focuses on the capabilities and needs of working at fractions of the micro scale. Nano tech approaches the size of single atoms or small groups of atoms. In this realm many of the forces with which we are familiar operate under completely different principles. It is a realm completely foreign to us but with many applications for health, for industry and for War. We are only beginning the age of nanotechnology. Our closest examples exist in the biological world. Organisms and their components naturally operate at the atomic level to generate that most incredible achievement – life. Our challenge is to mimic the capacities of biologicals with mechanisation. A machine can operate at many times the power level of the biological. For example a simple electric drill of 600 Watts essentially operates with the capacity of six human beings (basic capacity of 100 Watts per human). To mechanize the nano world is the achievement – amplifying the current capabilities of biologicals.

Goo : But if the nano workers are really small, how can they really do much?

Kinkajou : Firstly, we can have lots of nano workers. Secondly, the technology allows us new ways of doing things, and perhaps things that we could not do before.

Beethoven : And we can have nano soldiers to shoot the nano workers!

Erasmus : The “Transparent Alumina” page looks at the technologies inherent in transparency. Glass is one of the most incredible inventions of the human era – allowing light to enter a human built space, but confining heat and air within. Humans can look out through a physical barrier. We require transparency in many areas of our world. Our machines also need to see through physical barriers, as do our weapons. The example in Star Trek looks at using transparent alumina with its inherent flexibility to allow the transport of whales through time to the future. Strangely enough transparent alumina is actually very familiar to us – in the form of gemstones.

Goo : But it is transparent how will we know that it is there.

Kinkajou : Transparency is a relative phenomena Goo. So you can still see that it is there. You can sort of see window glass even though it looks clear. And we are also talking about things that are transparent to photons with a specific range of energy. Glass is transparent in the visible electromagnetic range, but we need resistant materials that are transparent perhaps at higher or lower frequencies – as in vision systems for weapons or missiles.

Erasmus : In the “Vertical Farming” page we look at the industrial production of food. Food production is one of the most poorly mechanised of all of our industrial processes. The lag time between intent and yield can measure in the years. The planet is running out of arable land so we need to multiply the yields out of the spaces we already use. We need to produce food closer to where it is consumed to minimise transport and distribution costs. If we are to avoid the catastrophic collapse of civilisation, we need to plan to have the needs of a society met locally – and food production is one of the most critical needs of the population.

Dr AXxxxx : Vertical farms is just a concept to let other people drop shit on your head and get away with it by calling it fertiliser.

Erasmus : "Energy Shields" form an unusual technology. It is only the realisation that there are many dimensions to matter that suggest perhaps that these dimensions may be manipulated to redirect or to store energy – in effect creating an energy shield. Current theories of the structure of matter suggest that up to 13 dimensions of something constitute true matter as we know it. There is also the suggestion that a different universe awaits us on the other side of the “BRANE”.

Goo : Can we play peek a boo with an energy shield?

Beethoven : I suppose you can Goo if they are transparent.

Erasmus : "Gravity Generation" is the current frontier for the development of new propulsive technologies. Again humanity is doomed to be imprisoned on our planet unless it can learn to generate or manipulate gravity.

Beethoven : Gravity makes things heavy. So will we be able to move the machines that make the gravity, because if they make gravity it would make these machines heavy too?

Goo : A torch can make a lot of light and still be light Beethoven. So I suppose just because something can make something like gravity doesn’t mean it has to be heavy.

Erasmus : The “New Vehicle or Car” pages look at how the modern motor vehicle is ceasing to be a viable alternative for our civilisation. In our crowded cities on our crowded planet, the use of 1500 kilograms of vehicle to move one person seems ludicrous. Many of the major car companies have failed to innovate or to look at new alternatives to our current vehicles. Failure to innovate guarantees a company competition in the “commodity” market. We have seen the example of Apple I-phones decimating opposition companies, who once completely dominated the phone market. New technologies addressing social issues/needs of users were clear winners over unenhanced technology.

Kinkajou : I’d like a new car. With a concept like this, perhaps I can own a "work day" car for commuting to work, a "shopping car" for picking up things like at the hardware store, and maybe a "car for using on weekends" with the family. Each family would need a few different cars to suit different needs.

Erasmus : The “Internet Revolution” is maturing but there is still much further to go. The Internet allows the network distribution of information – in the form of “actual” data or in “command and control” data. To develop the sprite – or the Internet of things, we need to develop a network capable of interfacing with microscopic entities or devices. We make the point that it is the social aspect that is perhaps the greatest frontier in allowing the full usage of the concept of the Internet. At the most basic level, it is who pays for access which limits our access. While we can often obtain information from the latest Journal, very few people on the planet would be able to pay forty dollars as may be requested to access this information. It is these other issues – who pays for what – which will limit our exploitation of the concept of the Internet.

Goo : If you need more information, I could google it if you want.

Erasmus : “Climate Control” is a technology which looks at changing the weather on the planet over geographical distances. Large parts of our planet are uninhabitable. Our burgeoning population demands that we find ways to use our most neglected spaces. To control climate also allows us to ameliorate disasters which impact so severely on human habitation at times. Cyclones in the southern hemisphere or hurricanes in in the northern hemisphere are examples of climatic phenomena which impact severely on human habitation, especially as the human population burgeons.

Dr AXxxxx : Next thing you idiots will be planning big umbrellas.

Kinkajou : Well solar shades have been suggested as one of the climate control technologies. These could be located in space. By evening changing the colour of our roads, we can change their heat emission profile. So there are many ways of influencing the weather and climate.

Erasmus : “Farming Australia” looks specifically at the technologies which may be used to change how we use the vast areas of this one of the most arid areas on the planet. The page makes the point that in implementing change – the first step is to measure the variables involved in the change, then to undertake actions to create change, to remeasure the effect on the initial variables – to allow us to make further changes. The scientific method of experiment – trial, measure, change, remeasure.

The Commandant : I feel sorry for anybody who has to work farming in inland Queensland. In summer temperatures can hit to 45°C in the daytime across much of Queensland and inland Australia as well.

Erasmus : The “Orbital Engine” pages look at one of the key factors which imprison humanity on this planet. The ability to escape the gravity well of planet Earth, prohibits humanity from developing habitats in space and through the solar system. Again while we can achieve orbit with our current technology, it is the financial or business plan which limits our activities. We can access earth orbit today, but at a prohibitive price.

Erasmus : “Recycling” looks at the technologies involved in turning trash into treasure. Again the business case for recycling obviates the use of recycled materials, if virgin materials are cheaper. To encourage recycling, requires commitment and addressing the financial issues.

Dr Xxxxx : If all the Kinkajou’s of our world own a fleet of vehicles, we’re going to be in for some serious automobile recycling. 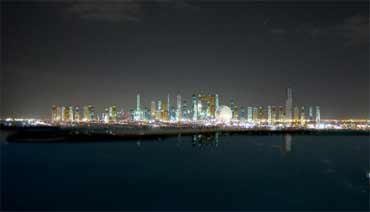