Transparent metals have played significant roles in SciFi in the future:

We need your help
because we want to keep on giving our knowledge of the world to you.
Our Sites are run on voluntary donations

Kinkajou:   Thank you Scottie for travelling across time to share some of your experience of technology with us.

Scottie: AIY! You are indeed right to seek out a Scotsman for technological intuition. After all, all Scots are engineers, and all engineers are Scotsman.

Kinkajou:   I’ve heard that before. Let’s keep going. Tell us about transparent alumina.

Scottie:  Transparent alumina has been a well-known technology to people of my time. Travelling back through time to locate cetacean humpback whales and to bring them to a crowded human future, required a technology to maintain them in the marine environment to which they were accustomed.

The only material strong enough to provide a practicable solution was transparent alumina. This material is flexible, strong and of course most importantly transparent. Being transparent, it allows us to monitor our whale guests, ensuring their welfare.

I was not aware that this technology has not been available at that exact point in time but thought from my lessons in history that someone around that time had indeed invented it.

Kinkajou:   One of the true paradoxes of time travel. So why not use a different technology such as energy or force shielding?

Scottie: Energy and resource imitations and the requirement to maintain containment even during light speed travel meant that energy shields could not be employed on board to provide environment containment for our humpback whales. External shielding has been available and used by us for some time.

Obviously, one of the most important uses is in protecting the ship during combat situations. However, in later versions of the Enterprise, even many windows present in the ship used force containment fields.

I suppose one of the issues with technology is that as one uses the technology more and becomes more familiar with its capacities and failures; its usage begins to cover many more applications where cost benefit situations can be seen.

So our appreciation and use of energy shields has changed somewhat even during my lifetime. We have also seen the situation where the Borg ships are able to absorb much of the energy targeted at them through the use of advanced shielding for their spaceships. It also appears to have some implementation at the individual level, allowing the Borg individuals to adapt in conflict situations and to negate the effect of many weapons.

It becomes obvious we have a long way to go before we reach a saturation point of our knowledge of this technology.

Kinkajou:   So Scottie, tell me how has the world changed?

Scottie: The world in which the Enterprise exists is a very different world to the post-Holocaust world in which the warp drive was invented. The world has pulled together to overcome its’ problems. When we experienced first contact with the Vulcan, we realised that as a species we needed to cooperate to survive and thrive.

Many of our petty squabbles pale into insignificance against the difficulties and problems that exist in space. Society has become much more considerate and caring of its hopeless cases. Resources and power are no longer limiting factors to how people manage their lives. Space provides the resources that can be used to provide adequately for all. Teleportation of matter has completely changed logistics of both entering and exiting orbit, of mass-producing complex materials and of resource/power distribution. People can now choose to be what they wish to be.

People can strive to succeed without being limited by the need to maintain themselves. Availability of resources and power has totally changed the social dynamic. Accumulating resources begins to become a questionable activity when resources are plentiful (not scarce). World trade becomes more about trade information and skills, not of resources or power.

Di-Lithium crystals form the basis of the propulsive energies of our starships. When placed in a high-frequency electromagnetic field, magnetic eddy flux is created within the structure, isolating charged particles such as anti-matter away from the crystal lattice. Antimatter cannot be annihilated because it cannot contact normal matter.

As you realise, antimatter due to energy density, is a prime source of spaceship propulsive power.

Kinkajou:   Have any of these factors changed your world?

Scottie: Our engineering and energy processing capabilities have revolutionised our organic processing capacities. But more importantly, the human race’s ability to work together has solved many of the technical problems that had previously limited food production.

As a corollary, the production of organic feedstocks for biosynthetic reactions has also been enabled by substantial advances in all aspects of molecular biology.  Each advance in technology , has heralded in new advances in many fields, driving even further and faster innovation.

As we have opened up new colonies, the numbers of available colonists are swamped by the huge areas of arable land available on new worlds. The problem faced by humans in early history of the limited supply of arable land is no longer a problem in the new era of the Enterprise.

Kinkajou:   Thank you Scottie: It becomes obvious and talking to you that the most significant advances in human technology in your era lie with the technologies that enable orbital entry and orbital departure, and the engineering triumphs associated with the processing of antimatter and teleportation systems. I wish you well. And don’t forget to feed your humpback whales. I’ve heard that sometimes they also like a bit of a scratch behind the ear. Must be a mammal thing. 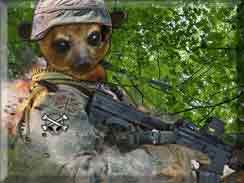 XC, tell me a story.

XC: I was a refugee from an earth, destroyed as if by accident. Our civilisation had developed a new building material. We called it “Bullerite”. This was an incredibly cheap, easy to work and incredibly strong material. Construction on the earth reached an almost exponential growth, as the bullerite was used to build increasingly larger buildings and cities.

However, there was a problem. The material was not stable, but this was not immediately apparent when it was first introduced. After approximately 100 years, the bullerite entered into a decay process. The material gave off toxic gases, and essentially began to deteriorate or rot.

The presence of other decaying material accelerated the onset of the “rot” process. Within the space of a few years, the earth had become a ball of toxic decay. Cities fell apart, killing billions. This effect was exacerbated by the presence of the toxic decay gases. Civilisation on our planet essentially ceased to exist, as the entire ecosphere became contaminated with decay products of bullerite.

I look back on our history and wonder how things could have been changed. Why didn’t we realise the material was unstable. Why were we in such a hurry to introduce this artificial construct into technology? Humanity may still exist if it were not for the technological stupidity of its members. Why couldn’t we have invented transparent alumina instead?

Kinkajou makes some notes on the home place of the Connatic, who rules the Alastor cluster from his palace on Lusz in the world of Numenes.

The palace is a structure famed across the human universe. Five pylons veer up from five islets to form a groined arch, 300 m above the ocean, supporting at the first a series of promenade decks; then a bank of administrative offices, ceremonial halls and the core of the cluster communications system.

The private quarters of the ruler are at the highest pinnacle, penetrating the clouds and are over 3000 m above the sea below. When sunlight glistens on its iridescent surfaces, the palace is a wonderful site, is often considered the most inspiring artefact created by the human race.

How is such a feat possible?  The only structure strong enough and flexible enough to allow such an incredible edifice to be constructed is of course: Transparent Alumina.  And so here we see one of the most awe-inspiring technological applications of something that started its technological life is a simple window on a spaceship. 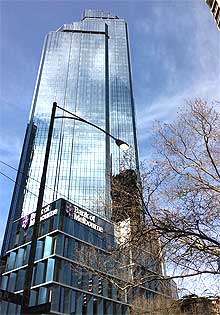 Transparent Alumina in the buildings of the future.